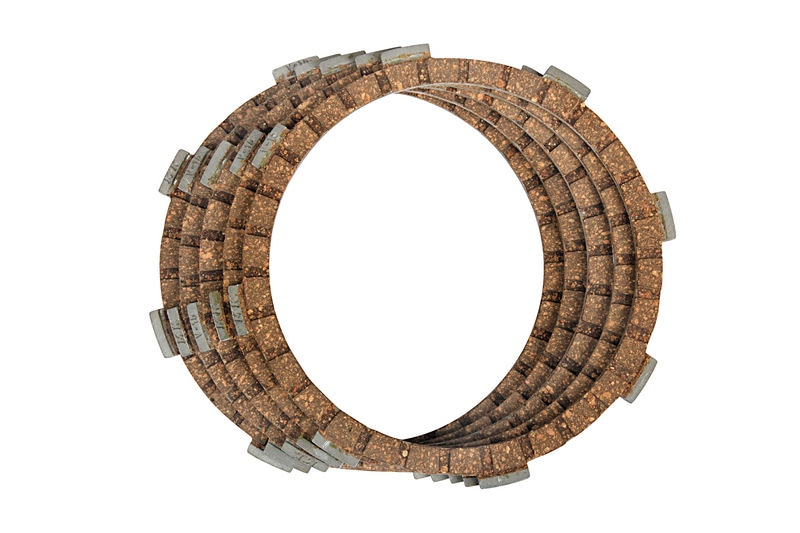 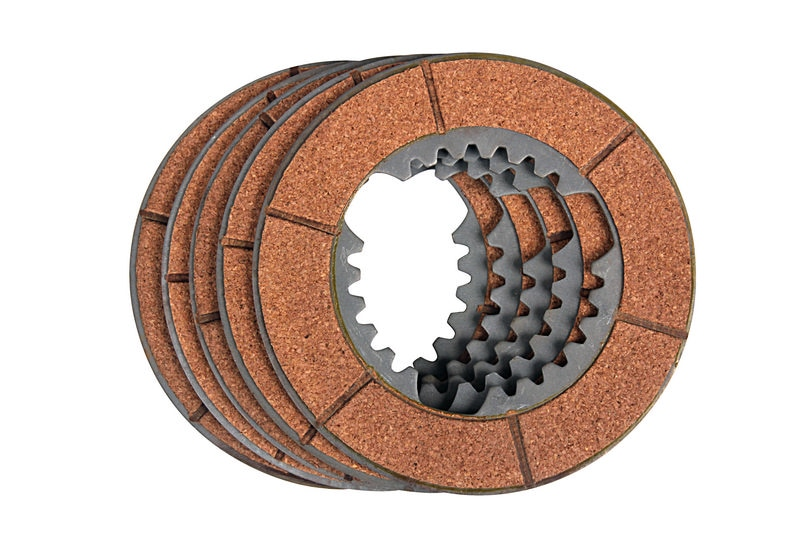 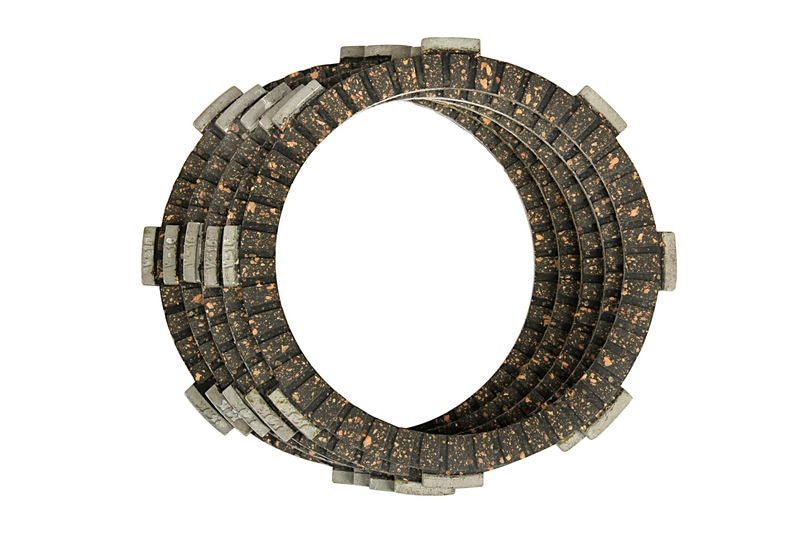 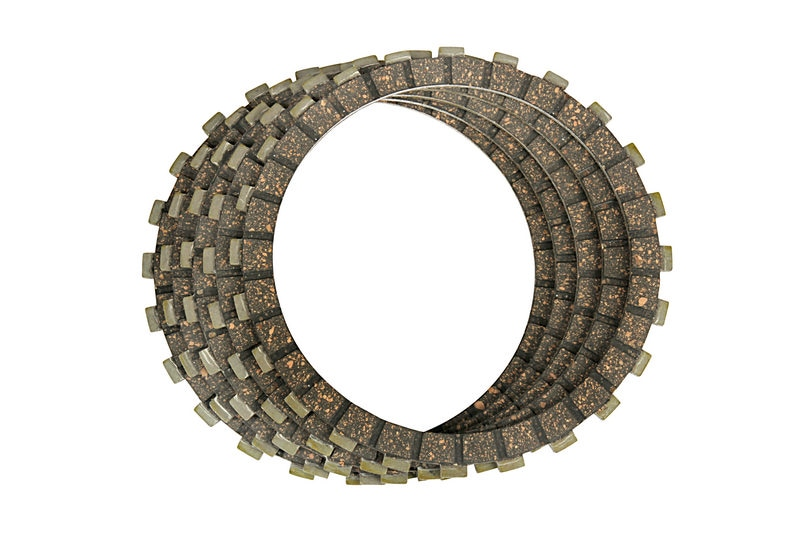 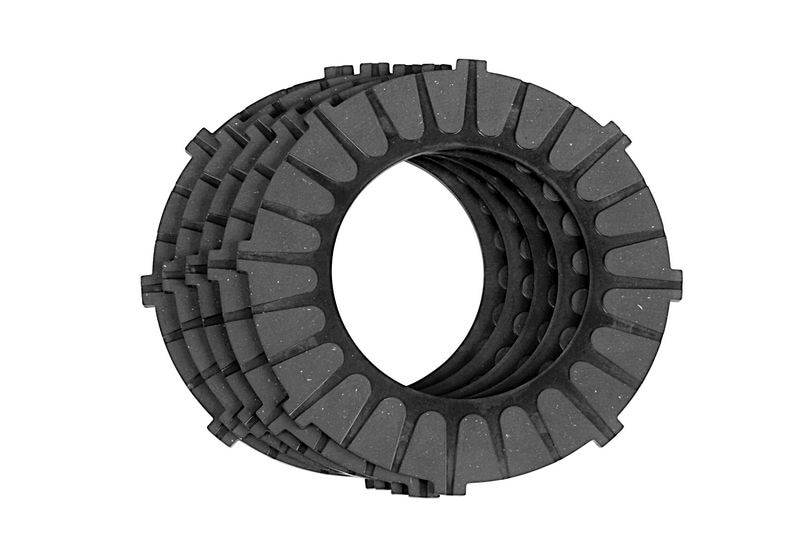 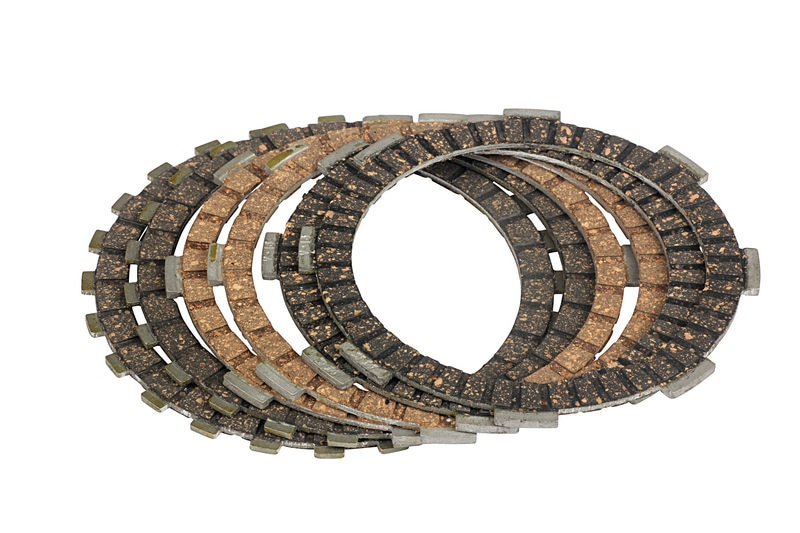 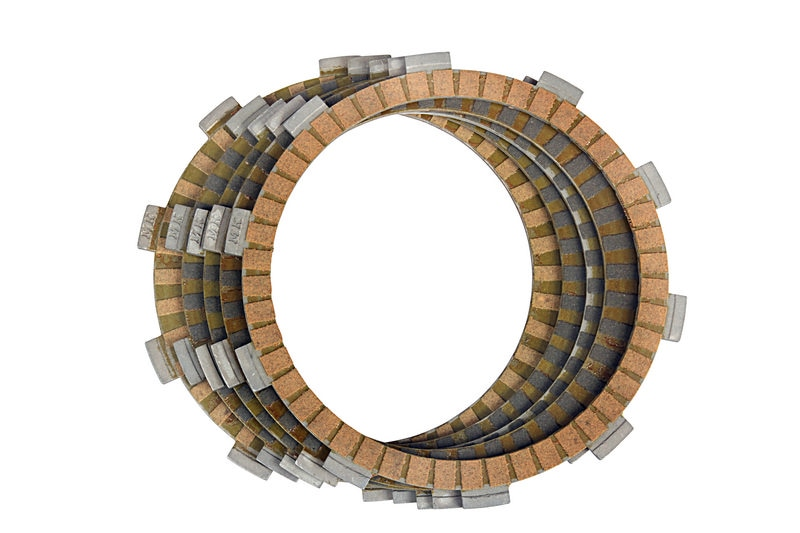 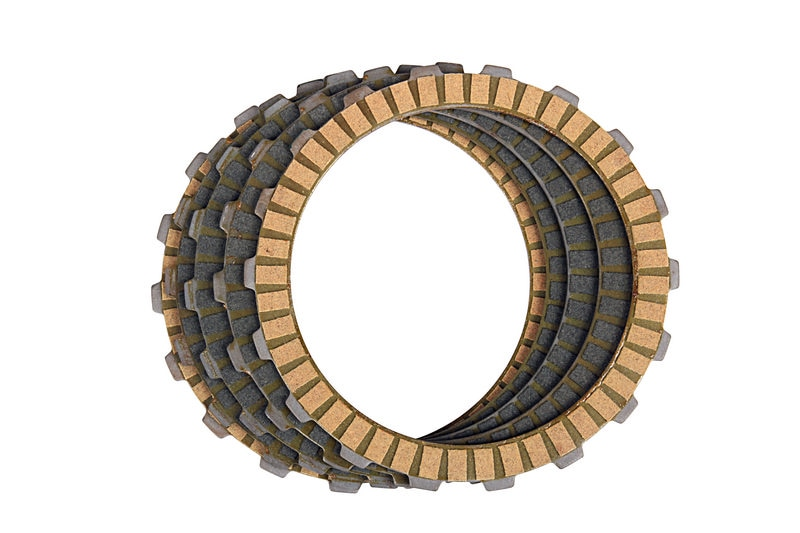 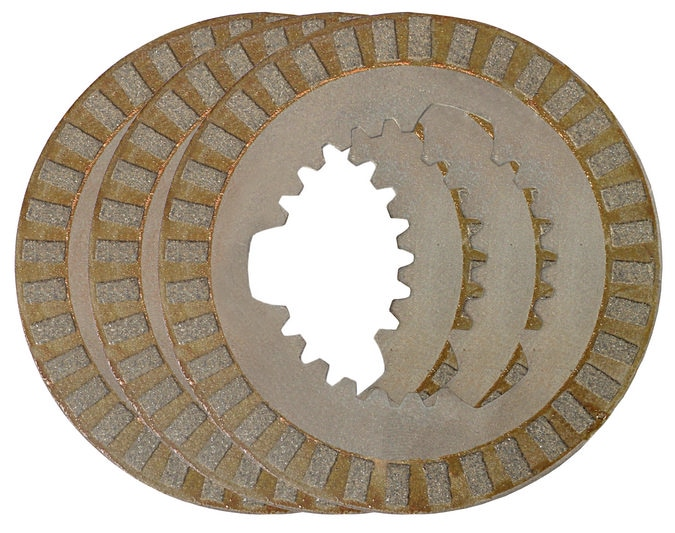 Clutch is a device which helps to transmit a certain power from engine to the gearbox and subsequently to the drive wheels. Intermediate friction plate are made of high carbon steel and the core plates are made from aluminum, steel, high temperature resistant plastics, or phenol resin based fiber depending on the design of the clutch. The friction material in wet type clutch is made in three types, rubber based, cork based, paper based and for dry clutch, resin and fiber based material is used.

This friction material is lined on the core plates to generate the torque in the engine. There are different friction materials for different applications to enhance the quality and performance of the vehicle i.e. more mileage, more life, high pickup etc.

The clutch works on the principle of friction. Two friction surfaces are brought in contacts with each other when applied a force during engagement, here they are united due to the friction between them and transmit power from engine to the gear box and subsequently to the driven wheels.

What is the Function of Clutch?
In simple words the function of clutch is to move and stop the vehicle without damaging the engine. The clutch play a key role, as it is fitted inside the engine to stop the power from being transmitted to wheels. Clutch also has a major importance for smooth engaging and disengaging of gears which ultimately stops the engine without damaging.

Mechanism
Transmission in automobiles is a systematic arrangement of parts connecting the engine to the wheels. The simplest transmissions are manual transmissions, and consist of a system of interlocking gearwheels; these wheels are arranged so that by operating a lever the driver can choose one of several ratios of speed between the input shaft and the output shaft. These ratios are called gears. To allow smooth shifting from one gear to another, a clutch is provided to disengage the engine from the transmission. A clutch is a mechanism for transmitting rotation, which can be engaged and disengaged. Clutches are useful in devices that have two rotating shafts. In these devices, one shaft is typically driven by a motor, and the other shaft drives another device. The clutch connects the two shafts so that they can either be locked together and spin at the same speed or be decoupled and spin at different speeds.

Working
On motorcycles the clutch is operated by a hand lever on the left handlebar. No pressure on the lever means that the clutch plates are engaged (driving), while pulling the lever back towards the rider disengages the clutch plates through cable or hydraulic actuation, allowing the rider to shift gears. These clutches are usually made up of a stack of alternating plain steel and friction plates. one type of plate has lugs on its inner diameter that key it to the engine crankshaft, while the other type of plate lugs on its outer diameter that key it to a basket that turns the transmission input shaft. The plates are forced together by a set of coil springs when the clutch is engaged. Racing Motorcycles often use slipper clutches to eliminate the effects of engine braking. In a car the clutch is operated by the left-most pedal using Hydraulics or a cable connection from the pedal to the clutch.

Clutch Friction Disc – Cork, Rubber and Paper Base
Cork base clutch is made up of Heat resistant non asbestos cork and fibers. Grooves are cut into friction material to aid cooling and releasing Clutch disc. In 4 wheeler clutches, the rivets are used to hold the friction material to both sides of the metal body of the disc. Cork sheets are made from natural agglomerated cork products in different thickness and use in different applications such as clutch facing cork sheet components which is highly compressibility and friction product.

Rubber base friction material consists of different variant of rubber, cork, chemicals & resin, these are blended together in different ratio to make the formulation for different applications to give the best performance. The paper base clutch friction disc consists of various specific ingredients such as cellulose fiber, synthetic fiber, cotton fibers, solid lubricant and friction modifiers molded together. Cellulose is used to prolong life of the clutch and provide more tensional strength. Paper clutch friction disc has more life than cork base friction material.

Clutch Friction Disc 2-wheeler
Two Wheeler clutch friction disc also called as friction lining is made up of a splined round metal part plate covered with friction material (lining). The Splines in center of the clutch disc mash with splines on the input shaft of manual transmission, this makes the input shaft and disc turn together. However, the disc is free to slide back and forth in the shaft.

We at MK are producing clutch plates for vehicle starting from 50cc to 650 cc. MK always works with latest technology & innovative thought so that it can produce the best quality at optimum price for Indian as well as overseas market.

Surface Design Of Plates
The interaction of various plate surface patterns such as spiral grooves, radial slots, square patterns and waffle patterns with the special properties of the various oils, makes it possible to solve most application problem - Torque build up and thus clutch engagement time and thermal capacity can be modified by the appropriate choice of plate surface pattern, cooling oil type and cooling oil flow.